For the Love of Seahorses!

Sea Horses are really unique and have unfortunetly been on the endangered list since 2004. When she was younger, my Grandmother, Gabrielle used to keep these surreal animals as pets. Her fondness for them has never changed as she frequently takes me with her to visit the aquarium with her at the Mall of America. These ornate accessories are a fun way to show your love for these splendid creatures and could be put anywhere from a kids bedroom to any nautical themed room. They add a playful quality to a room with their amusing colors and fun swirly shape, and can be seen everywhere from a childrens room to a sitting room--usually best in small amounts, think of them as the sprinkles on top of a perfect sundae! 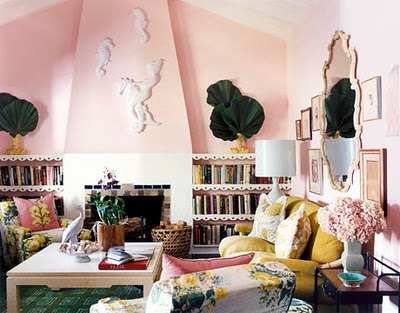 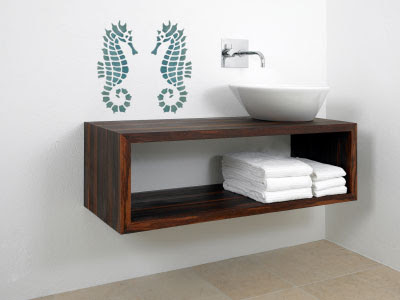 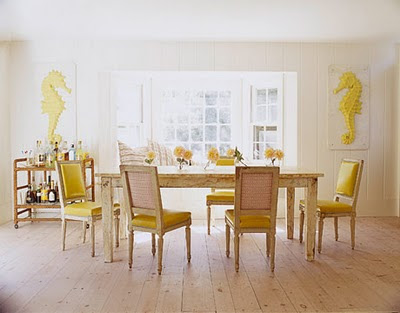 Things to Muse About: Decor, Seahorses 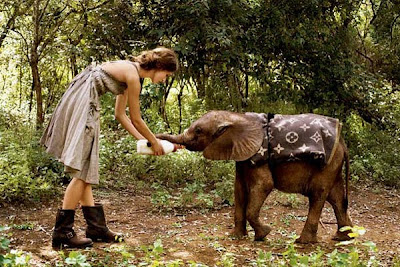 I can't image in a picture any more cute or luxurious. People tend to have this idea of elephants as dirty, but let's face it this one is toting a frock much more high end then most of the people who probably take care of him. Guess luxury is just the price for being so adorable. I showed this picture to one of my good friends Kendall who loves both LV and elephants and let's just say she was speechless, just the effect I was hoping for:) Hope this wonderful photograph inspires all of you as it lightheartedly advocates the riches which it carries!

Paisley for many years has caught my eye, the fabric has an appealing look to it in my opinion which allows it to draw attention to itself whether it be used in a large or small scaled fashion. The catch behind my fascination with paisley is in fact its ability to be so versatile, its seen not only in the most chic decor but also used as accents in clothing, whether it be for children or adults. Its designs are ever-changing to ensure its popularity for years to come. Paisley prints originated in Persia and India. It is said to resemble both a stylized flower and a cypress tree, which is a representative symbol throughout many religions for life and eternity. Now, the feminine touch to paisley causes it to be used in a lot of decorating and thrive in clothing fashion as well. 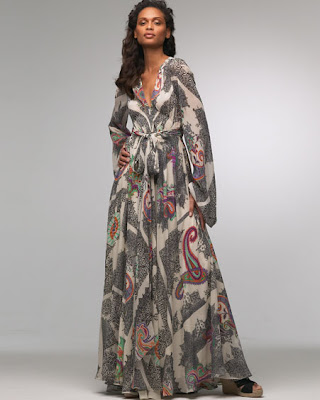 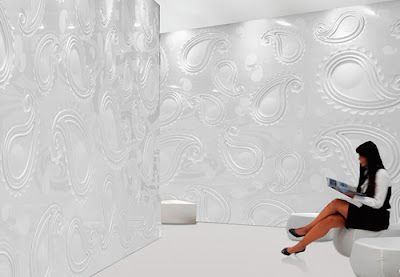 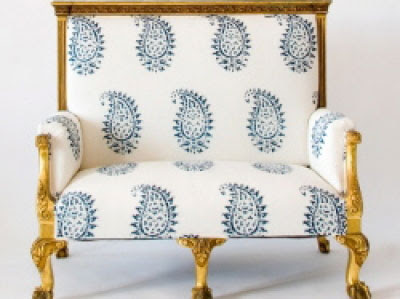 So, it's definitely been way to long since i've had time to post as much as I did in my first few weeks of blogging. Not that life for me is usually all that busy and such, but for some reason, august has a knack for bringing out the beautiful writers block. The stress of one month to go until school really starts getting at me, but when you think of it isn't summer only like two and a half months? So technically speaking I've still got plenty of time for a little R & R. Then again, now that I'm older school is never really out, I mean I still have to read multiple books, write essays, take an online course, and be ready to feel inspired enough to make it through the next 9 months of syco. Now tell me, does that sound like a joke to you or what? The whole point of summer is to be able to spend time doing what we teenagers do best, (sleeping, partying, working...maybe?) but now over our small two and a half month vacation we also have to worry about when the hell we are going to stop procrastinating and read these stupid books. Of course It's not the teachers fault the classes have higher expectations... but seriously they do have what nine and a half months in order to squeeze as much of this crazy book reading in as they want. All I want in return is the R & R that I earned over the last nine and a half months. Thanks for the listening, enjoy your last couple weeks in peace! 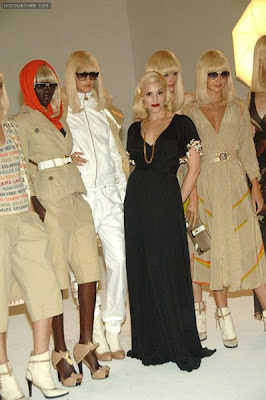 well ladies you know what they say...blondes do have more fun! Clearly expressed through Gwen's fun monochromatic models. 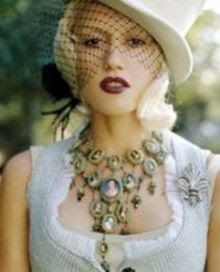 whoever said less is more is clearly off kilter here because she looks fabulous.

Prints & Patterns-she definetly knows how to dress to inspire me.


One of my favorite icons of all time is Gwen Stefani. When was the last time you saw her infamously receiving a DWI, 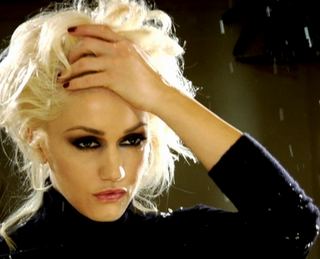 or leaving her son defenseless in a ninety degree car? That's right, never. She is an amazing rolemodel due to her wacky sense of reality and glam lifestyle along with her ability to flawlessly reinvent herself nearly every decade--remaining forever more an idol. Not only do I adore her persona, but also her style is simply impeccable. Every time she is caught by the paparazzi, whether she is strolling down the streets or at a huge event, her look is always immaculate. Even her son, is always dressed to tackle anything in his way. All of her music videos are wonderfully done, my favorites as of now are in her album Sweet Escape, which like all her albums sold like mad. I specifically like ‘4 in the morning’ and ‘early winter.’ She has also since popularized her haute couture line LAMB, which has really hit some major runways and is continually bringing new styles to fashion season after season. love,love,love,love her.

I'm of course on of those suckers for the Indian inspired trends. Something about the simplicity and unique way the things are created make them extremely genuine to me, despite the fact that I have not a drop of indian blood. Another thing that interests me about the Indian culture in general is their ornate symbols with strong traditional meanings. After reading the book, A Thousand White Women, which my grandma suggested, I feel a sort of connection with the Indian heritage and have obtained a great appreciation for their culture. One aspect that really stayed with me throughout the book was their ability to look past selfishness and instead respect the whole natural aspect of life by only taking what is necessary-something which in these times is drastically overlooked. The spiritual connection they have takes in consideration for everything around them which is also something that most people often don't think about. Minnetonka moccasins created quite the stir in my area, since I live in Minnetonka, as people actually began to buy them again. Buyers love their practical durability and the fact that they are very comfortable. I have a pair which I bought for the school season last year and I was actually surprised how often I ended up wearing them. Another Indian inspired item I adore are the dream catchers. Meant to ward off a bad nights sleep and horrible dreams, they're actually quite pretty looking. My good friend Sam even started wearing them around like a necklace. He got lots of compliments and I wouldn't be surprised if more people began doing the same thing. So if your looking for a new look that expresses the love of mother nature, of all the struggling Indian tribes, and also of comfort and practicality, this could be your look. 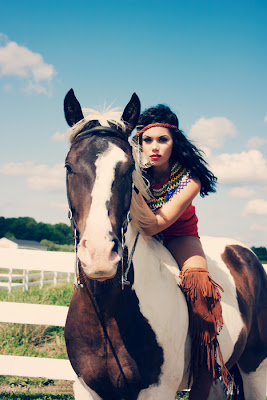 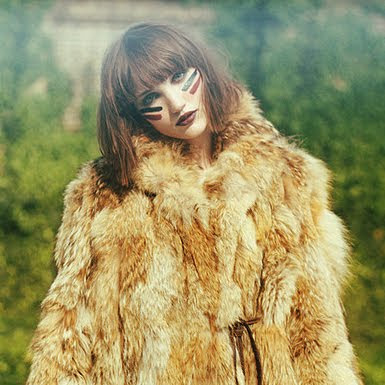 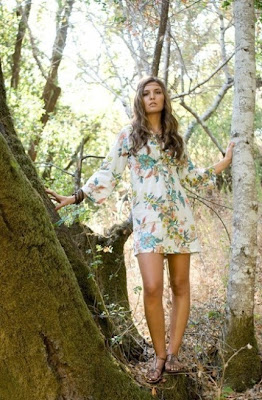 And for those of you that don't see wearing fashion-photography type outfits appearing in your wardrobe any time soon but still love the idea of some indian based essentials, I would recommend a stop at your nearest H&M store. I found a few really cool indie-type dresses and tunics for amazing prices that would do the trick. Also look out for anything turquoise, its a really complementary color that adds some pop to any outfit--recently I bought Essies color Turquoise & Ciacos...let's just say I love it. Also as said before, mocks are great, affordable. Look out as well for things with cool tribal prints such as scarves because that could really spice up your back to school wardrobe as well! But until then, soak up the rest of summer!
Posted by Tate Libera Swanson at 15.8.11 1 comment:

Tate Libera Swanson
“We are shaped and fashioned by what we love.” This Johann W. von Goethe quote epitomizes my infatuation for fashion and design. This blog will attempt to mirror the idea represented in this quote as it will express what I see around me, my inspirations & adorations.

Stores Every Muse Must Know!

Things to Muse About